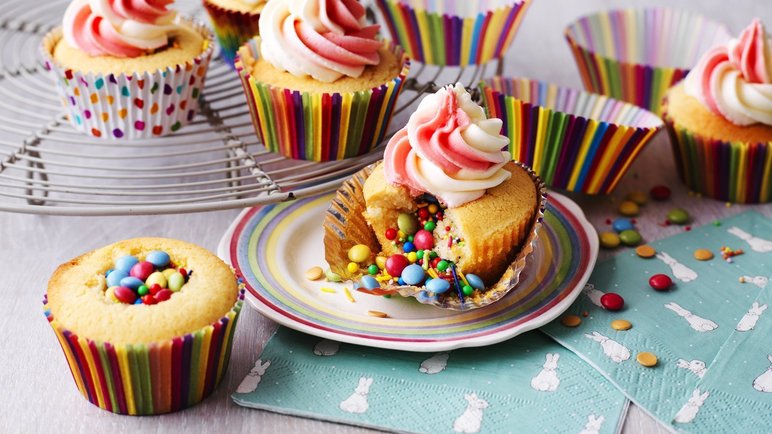 Steps to make Pinata Cupcakes
Bake 24 cupcakes according to the box instructions. Let cool completely.
Pour 1 cup of the shredded coconut into a bowl. Add 3 teaspoons of yellow food coloring and whisk with a hand mixer on low until coconut is bright yellow. Set aside
Add 1 cup shredded coconut to another bowl. Add 3 teaspoons of yellow food coloring and 1 1/2 teaspoons red food coloring then turn the mixer on low. Mix until the coconut is a uniform reddish orange. Set that one too aside
In a separate bowl, add the remaining 1 cup coconut. Turn the mixer on low and add 6 to 8 drops of blue food coloring. Mix until the coconut is a uniform bright blue. Transfer to a third bowl.
Mix together the chocolate candies, fruit candies, and nonpareils in a medium bowl. Set aside.
Using a 1/2-inch round cutter, cut out a well in each cupcake. Then use a small spoon to scoop out the wells.
Fill each cupcake well about 2 teaspoons with the mixed candy.
Cover the holes with the cut-out tops of the cupcakes.
Frost the cupcakes with the vanilla frosting. Press some of the blue coconuts onto the outer third of the top of each cupcake to form a stripe.
Then press some of the yellow coconuts in the center third and finally the orange coconut in the final third. You should have 3 equal stripes on the top of each cupcake.

How to prepare palm nut soup in Ghana

How to prepare okro stew in Ghana

How to prepare groundnut soup in Ghana

How to Prepare Garden Eggs Stew